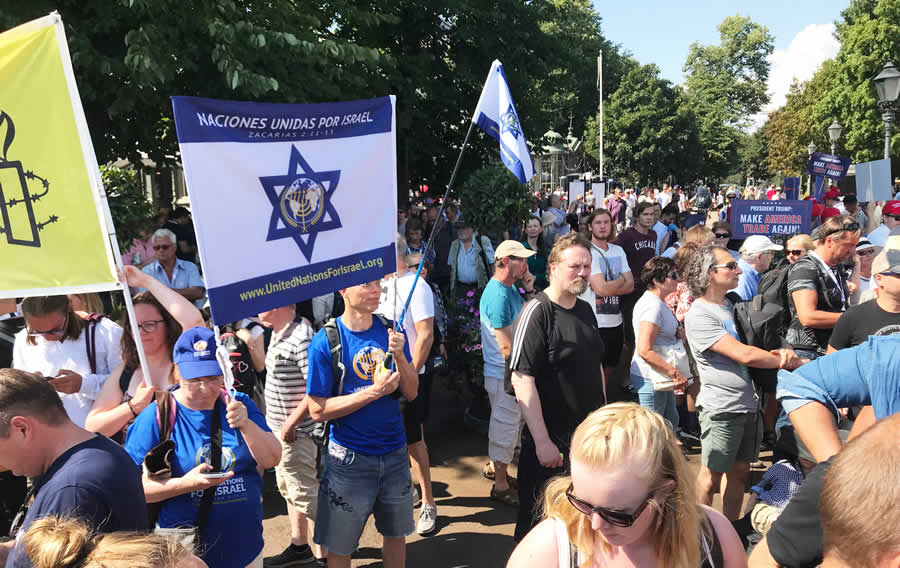 Shabbat Shalom beloved friends, partners and members of the United Nations For Israel!

What an exciting time this is – as previously announced, we will be establishing a headquarters in the Holy City of Yerushalayim – and now it is under way! As this is being written, members of our Team are preparing the beautiful building Yahveh has provided (with this spectacular view!).

It is located at the western gate area known as Mevaseret Zion – soon to become our Embassy for the United Nations For Israel. Without support from many of you this could not have been possible. For this we say a hearty, “Thank You!”. Also, special thanks to our manager Raija-liisa and Estonian Delegate Eha as they work tirelessly alongside Archbishop and Rabbi to meet our deadline for opening in a few weeks.

Additional finances are still critically needed to complete the task of properly furnishing the Embassy (which includes multiple bedrooms and living quarters) – please seek the Father’s will regarding what amount you should sow, especially to honor the upcoming Feast season. Each member and Delegate’s continued commitment as the vision comes to pass is vitally important. Remember this is YOUR embassy – and you are welcome to make a reservation to come stay there on your next visit to Israel!

Our official opening is set for September 28th. The participants on our Sukkot Tour 2018 and our 3 Day Conference will be present to witness this ceremony, which will include dignitaries from Israel that wish to share in our joy. More information will be forthcoming in our next report.

Please be in prayer as we launch this project forward, making this a strategic base of operations where members from all the nations can gather as watchmen on the walls for the Holy City. We need everyone to join with one heart to accomplish what Yahveh desires: to see the salvation of Israel in our day!

Isaiah 62:6, 7 NASB – “On your walls, O Jerusalem, I have set watchmen; all day and all night, they will never keep silent. You who remind Adonai, take no rest for yourselves and give Him no rest until He establishes and makes Jerusalem a praise in the earth.” 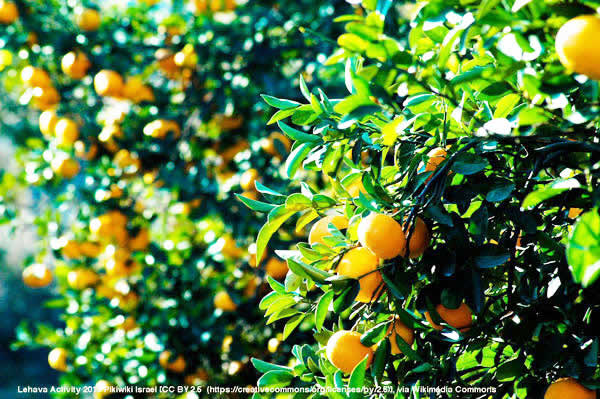 To Celebrate and as An Act of Restitution against terror:

On July 13th the United Nations for Israel planted a block of 4 fruit trees in honor of Israel’s 70th birthday. (see www.IsraelTrees.org) This is in fulfillment of Leviticus 19:23, “When you come to Israel plant FRUIT trees”. Also, in light of all the recent arson terror fires that have burned fields and trees, we seek to restore a multitude of trees for every one destroyed! In the words of Archbishop Dominiquae, “Our next aim is to plant a forest in the name of UNIFY!” Thank you, members, for being a part of this.

Reports from the Nations

Representatives in various nations have sent encouraging reports of how they are spreading the news about our UNIFY mission (read a few of them below). Be inspired by the Ruach HaKodesh – and pray, asking how He may use you, right where you live.

Remember, sometimes it can be as simple as sharing our website and teachings on your social media outlets – there is no limit to the amount of people you can reach! Archbishop Dominiquae and members of our Team work hard to produce videos and make them available to us. Take advantage of these tools that can share powerful messages across the globe! 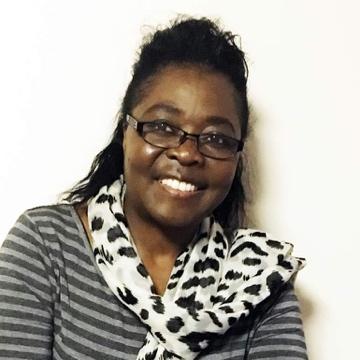 As the Unify Australian delegate, I was met with a lot of discouragement and self doubt as I watched the state of our great nation. It seemed as if we (as a nation) were headed more and more towards being a people with no values rooted in Yah, and some political parties were set to introduce policies rooted in secular values and even anti-semitism.

I felt such heaviness and even began to consider stepping down as the UNIFY Australian delegate due to lack of progress.

A few weeks ago I was on one of my prayer walks and Yah lead me into worship and prayer in the Spirit. I was then quickened to prayer and repentance on behalf of our great nation, but at first I resisted. I thought, there are plenty of people praying and repenting around the world, there’s no need to obey. Finally, I obeyed and started to fervently pray and repent on behalf of the nation of Australia and the church. I specifically prayed for Yah to expose and remove any anti-semitism in our federal government.

Weeks later, Australian senator Fraser Anning gave a speech at parliament calling for a “final solution to immigration problem”. People were outraged at this blatant display of anti-semitism; however Senator Anning was unapologetic and unrepentant.

Yesterday, things in the ruling party came to a head as the Liberal Party leader (and now former Prime Minister), Malcolm Turnbull, was ousted by vote within his own party in what’s referred to in Australia as a “leadership spill”. Our new Prime Minister, Scott Morrison, is a Pentecostal believer and has values that are more in line with the Torah than his predecessor.

Additionally, with the leadership spill there is now a new deputy Liberal Party leader. His name is Senator Josh Frydenberg (pictured below) who is an Australian born son of a holocaust survivor. His mission is to educate non-believers and anti-semites by bringing them to the holocaust museums in Jerusalem, to see for themselves what really happened. 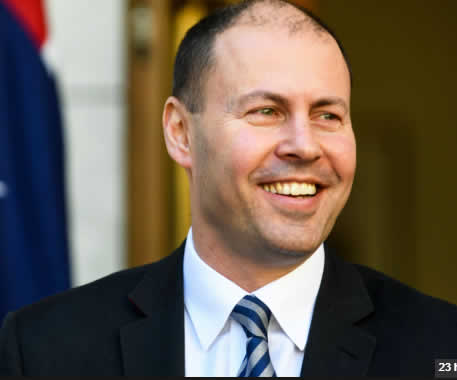 Thank you Archbishop and Rabbi for your efforts in bringing awareness to the dangers of RT. Your encouragement, prayers and support have truly blessed me and my family. This shy woman from Australia has found that she now has a family, namely a mum and dad, in United Nations for Israel. 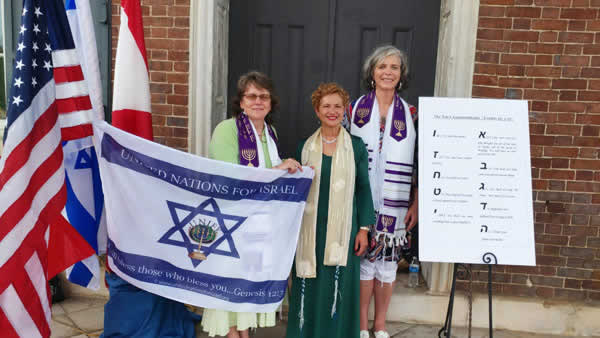 On November 6th we will be voting to add an amendment to our State Constitution regarding the public display of the 10 Commandments (see more details at www.tencommandmentsamendment.com). Prior to this vote we felt it necessary to petition Yahweh on behalf of our state, holding an Act of Repentance in Decatur, AL on August 12th – the first day of Elul, the month of repentance.

Believers gathered from various cities in north Alabama to join together, under the skillful leadership of Archbishop Dominiquae, in addressing issues that have kept us separated from Him and from each other. 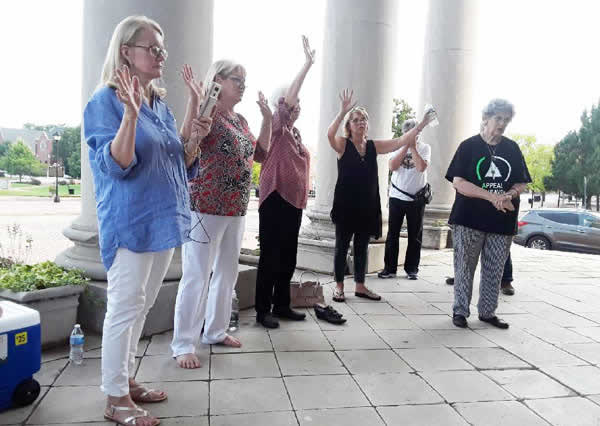 The flag of United Nations for Israel was displayed and our mission shared, as we believe this to be a milestone day for all of America as well – setting us upon the path to becoming a sheep nation. Repentance was addressed regarding racial division & denial, for wide scale masonic involvement by citizens, and for the removal of His laws from public display on our land – these are all important keys to turning Alabama back to Yah. Alphabetically we are the first state, called to lead the way – and we pray for all 49 others to also choose to honor and elevate His laws & ways above all else. 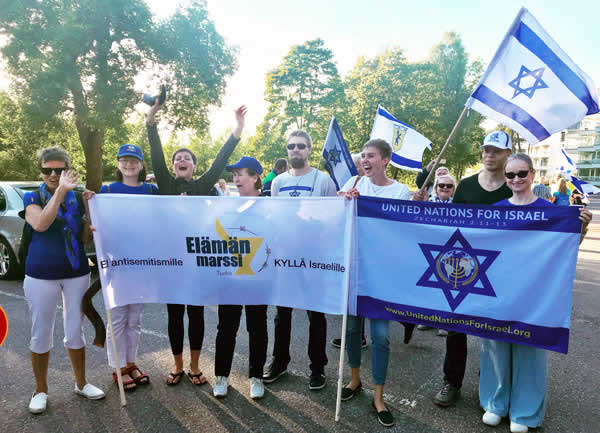 From our faithful UNIFY Team in Finland:

joining March of the Nations in Turku, Finland

March of the Nations is an event born in Germany as an act of repentance towards the Jewish people on behalf of the German people. This was the first time it was brought to Finland and organized together with the Jewish community in Turku. (Held exactly a year after a serious terror attack in Turku, where a muslim terrorist stabbed 10 people and two of them died.)

We felt on urgency to attend as a UNIFY team and travelled to Turku from different parts of Finland, together with over 100 other people (mostly Christians). There was also a small team from Germany.

We displayed the UNIFY flag and T-shirts, Israeli flags and brought shofars to sound.

Many demonstrations were held that day: Neo-nazis, Anti-facists and anti-nazis. The city was occupied with thousands of various marchers during the day. As we marched on through the city we sang Hebrew songs and blew shofars – it was powerful! Then next to a prominent church the German team was declaring a statement of repentance and prayer, asking forgiveness on behalf of anti-semitism, as everyone was praying.

After the march various people met and were repenting and asking forgiveness from representatives of the local Jewish Community (there are only two synagogues in Finland: one in Helsinki and other one in Turku). German ladies shared how they had found out the Nazi connections of their family and repented with tears in their eyes – also done by Finnish organizer lady, who had well understood the need for repentance and restitution.

Our team was interviewed by a Finnish Christian TV channel doing a program of the March. We shared about the importance of standing in the gap and repenting on behalf of our nation and introduced the United Nations for Israel. May the Spirit of repentance fall all over this nation!

We want to encourage all UNIFY members to attend Israel marches, events and meetings for the cause – the anointing falls and Yah can use you mightily to connect with people He wants to connect with!

Remember the words of Zech. 4:6 – Not by might nor by power, but by My Spirit, says the Lord of hosts.

NOTE: this bold Team was also in attendance at the capitol of Helsinki on July 16th when Finland’s President met with US Pres. Donald Trump and Russian Pres. Vladimir Putin. Their display of the UNIFY flag opened up opportunities to share our mission with the multitudes gathered outside the President’s palace. 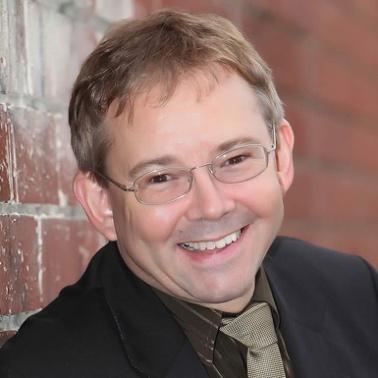 Divine appointments abound as ministry doors continue to swing open in the Philippines, giving opportunities in which to share the message of UNIFY. This land has had seeds sown for many years by Steve and others – now they are seeing an abundant harvest! Our Delegate and his wife were able to spend over 30 days there recently – and gave an in-depth report of many victories on our monthly United Nations for Israel members Online Conference call in August.

Don’t miss these important meetings (accessed by phone or by connecting online), as each month Archbishop Dominiquae and others share uplifting experiences by which we can all be encouraged.

Continue spreading the good news about this unique organization; as every member puts their faith into action it brings us one step closer to accomplishing our mission to establish Sheep Nations – especially the Chief Sheep Nation of Israel! Sheep Nations come forth, one person at a time, as we “REEDUCATE THE NATIONS ABOUT THE GOSPEL MADE IN ZION AND THE IMPORTANCE OF STANDING WITH ISRAEL AGAINST ALL ODDS”.

Please include these concerns in your prayers for UNIFY:

Together we are a powerful Team, connecting believers to His will being done “on earth, as it is in heaven”. Our voice will extend into eternity.